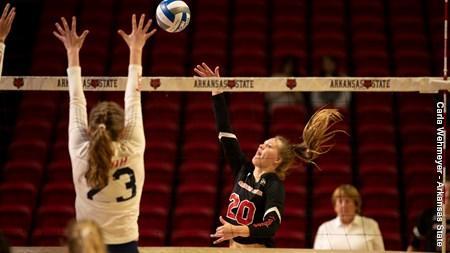 The Red Wolves tallied eight blocks as a team, including five by Yazmyn Billings and three from Kyla Wiersema, who hit .440 with 13 kills and just two errors on 25 attacks. Sarah Martinez added 19 digs.

The teams traded leads early in the opening set until USM surged ahead 22-12 with a 12-1 run. A-State clawed back with four of the next five points before the Golden Eagles took a one-set lead with a 25-17 decision in the first set.

A-State took control in the second set after an ace by Kassidy Reeves made it 11-8. Reeves tallied two aces and led the Scarlet and Black with 20 assists. A kill by Putt made it 14-11, then a later attack error by USM forced USM to burn a timeout. The Golden Eagles pulled within two on a kill by Wesley to force an A-State timeout at 21-19, which was well-timed as the Red Wolves tied the match at a set apiece by taking four of the last five points to take the frame 25-20, ending on kills by Billings and Helzer.

Southern Miss took an early 5-2 lead in the third after an ace by Megan Harris, who also corralled a match-high 23 digs before A-State surged back t take a 13-9 lead on a kill by Wiersema. The Golden Eagles rallied to tie it on multiple occasions before retaking the lead and expanding it to 22-19 to force a timeout. The Red Wolves cut it to 22-21 on a block by Putt and Wiersema, but USM took a 2-1 lead in the match with three of the next four points, claiming the set 25-22.

The fourth set differed little from the previous three, featuring eight ties. After Southern Miss led early, A-State pulled ahead by two on a block by Billings and Maddie Wiersema. An Ilayda Dincer kill capped off a tremendous rally going into the media timeout with the Scarlet and Black ahead 15-13. A 5-0 USM run greeted the Red Wolves out of the break to move the host Eagles in front 18-15, but A-State did not waver and battled back to cut it to one at 21-20 and force a Southern Miss timeout.

Arkansas State continued to apply pressure in an effort to force a fifth set, tying it at 23-all on a kill by Putt, but two straight points after a timeout helped USM clinch the match, escaping with the 25-23 decision in the fourth.

A-State returns to the USM Wellness Center Saturday for a rematch with Southern Miss, with first serve set for 2 p.m. on ESPN+.

Continued here:
A-State Drops Tough Four-Set Outcome at USM. Article may or may not reflect the views of KLEK 102.5 FM or The Voice of Arkansas Minority Advocacy Council