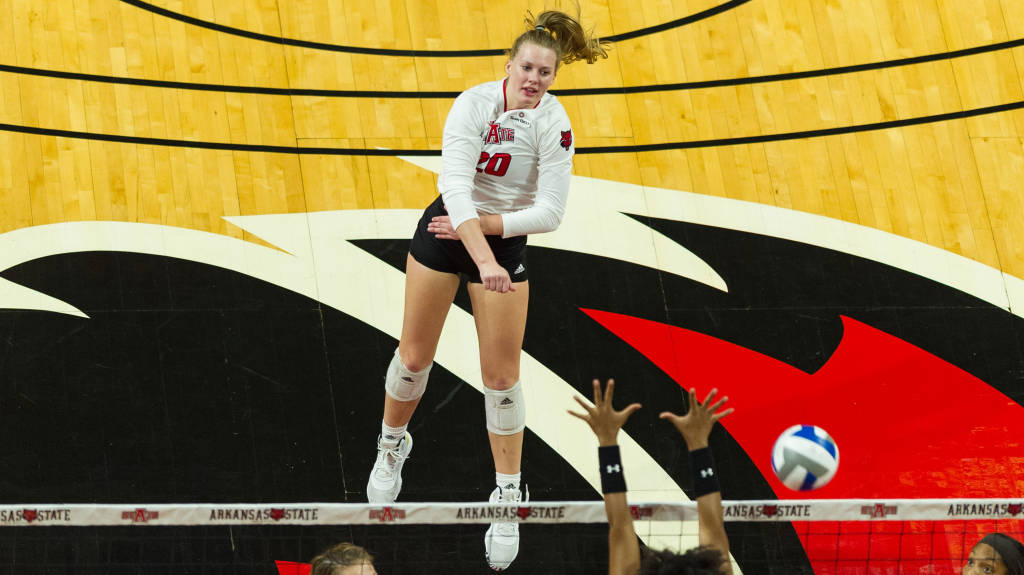 After taking a strong first set, the Red Wolves (15-11, 6-8 SBC) fought valiantly against the conference-leading Bobcats (21-8, 13-2), but 11 service errors combined with 11.0 total blocks by the home squad proved key in the match.

Defensively, Hannah Cox led all players with 18 digs to go along with six assists, while Terrell and Kendahl Davenport each recorded three blocks.

Set 1 – Arkansas State 25-22
Early in the opening set, both sides were neck-and-neck, with neither team taking more than a three-point lead. The Bobcats held the lead through the middle phases of the frame until a 5-0 A-State run turned the tables, giving the Red Wolves a 16-14 lead after a Davenport kill.

A-State continued to cling to that lead for the remainder of the set, taking a 1-0 lead in the match on back-to-back kills by Stanford and Terrell.

Putt and Terrell both tallied four kills in the opening set while the Red Wolves also took advantage of seven attack errors by the Bobcats.

Set 2 – Texas State 25-15
A-State carried that momentum over into the second set, mounting to an early 5-1 lead and forcing Texas State to use a timeout. Out of the timeout, the Bobcats surged back to take a 6-5 lead and ultimately stretch that lead out to as much as eight at 17-9.

A-State would take five of the next seven points to cut the Bobcat’s lead to five at 19-14, but a 6-1 run closed out the set, tying up the match at a set apiece with a 25-15 second-set decision.

Set 3 – Texas State 25-19
The Bobcats took early control in the third set, forcing an A-State timeout with Texas State ahead 9-6. TSU picked up right where it left off out of the timeout, stretching its lead out to 13-7, which forced the Red Wolves to call another timeout.

Texas State tallied two more points out of the timeout to make its lead 15-7 before an attack error followed by a Stanford ace helped the Red Wolves chip away at the deficit. A pair of kills by Davenport and one by Putt, followed by an attack error trimmed the Bobcats’ lead down to three at 16-13.

A-State then surged back, cutting Texas State’s lead down to one at 20-19, prompting the Bobcats to call a timeout. From there, Texas State closed on a 5-0 run to take the set and hold a 2-1 lead in the match.

Sobolewska posted four of her 10 kills in the third set to lead the Red Wolves.

Set 4 – Texas State 25-18
Texas State continued that momentum into the fourth set, taking an early 6-1 lead. The Red Wolves then countered with a 3-0 run to cut it to a 6-4 deficit on a Bobcat service error followed by a Putt kill and Stanford ace.

The Bobcats then stretched their lead out to 14-10, but that was just before the Red Wolves countered with a 3-0 run to make it 14-13 after an ace by Sobolewska.

A-State kills by Stanford, Putt and Terrell kept the Red Wolves to within three of the Bobcats until Texas State reeled off a 7-2 run to close out the set, including a stretch of five straight points, to take the set and match.

In the final set, Madison Brown led the Red Wolves with four kills while also tallying a block. Putt led in digs with three.

After returning from the Lone Star State, the Red Wolves host Louisiana (Friday, Nov. 15, 5 p.m.) and ULM (Saturday, Nov. 16, 7 p.m.) to close out the regular season and fight for a spot in the 2019 Sun Belt Conference Volleyball Championship, which begins Thursday, Nov. 21 in San Marcos, Texas.

Original article source: http://www.astateredwolves.com//ViewArticle.dbml?DB_OEM_ID=7200&ATCLID=211815842 | Article may or may not reflect the views of KLEK 102.5 FM or The Voice of Arkansas Minority Advocacy Council