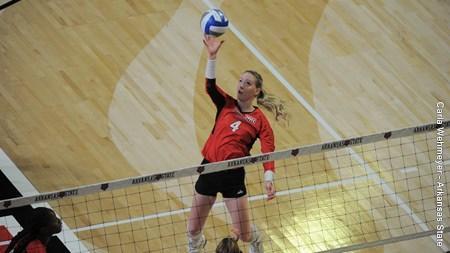 A-State hit .222 as a squad, with Elise Wilcox hitting a team-best .324 on her 13 kills with a pair of service aces. Lauren Musante handed out 29 assists, while Kassidy Reeves notched a double-double with 28 assists and 18 digs. Libero Sarah Martinez also registered a double-double with a match-high 25 digs to go along with 11 assists.

Marshall held early control in the first set, leading by as much as four at 10-6 before A-State rallied to tie it multiple times. The hosts widened the gap late to take a 23-18 advantage before the Red Wolves clawed back to within one. Marshall would go on to take two of the next three points to win the set 25-23 and lead 1-0 in the match.

The sides traded leads in the second until after the media timeout, when A-State relied upon a 6-1 run capped by a Maddie Wiersema kill to lead 20-15. The Herd trimmed the deficit to three, but the Red Wolves claimed four of the last five points to take the set 25-19 and knot the match at 1-all.

The third set was much of the same, with Arkansas State breaking away with a 5-0 run to lead 18-13 after Billings and Reeves teamed up for a block. A-State did not trail the rest of the way, despite a late push by Marshall, to clinch the set and a 2-1 lead in the match on a block by Billings and Putt.

A-State took that momentum into the fourth, taking an early 4-2 lead. Marshall then took seven straight points to reclaim the advantage and lead 9-4 on a block by Essence Clerkley. The Red Wolves cut it to 10-8 on a block by the Wiersema twins, but the Thundering Herd took nine of the next 11 points to push its lead to 19-10. After a kill by McElhaney later made it 23-17, A-State kept inching closer with two more points, but Marshall would take the set and force a decisive fifth set with a 25-19 decision.

The Red Wolves claimed four of the first five points in the fifth after a kill by Wilcox, then pushed that lead out to 8-4 after an ace by Putt and kill by Helzer. Marshall later rallied to tie it at 11, which would precede five lead changes and seven more ties, then held match point after a service error. Helzer saved the point and then teamed up with Kyla Wiersema for the block to give A-State match point up 16-15.

McElhaney then registered a pair of kills to put the Herd back ahead 17-16, but Helzer responded with her final two kills to put the Scarlet and Black up 18-17. A kill by McElhaney, followed by a block gave the home squad a 19-18 lead, with an ace by Bella Thompson clinching the match.

Arkansas State closes out the regular season Friday in a rematch against Marshall, with first serve inside the Cam Henderson Center set for 5 p.m. CT on ESPN+.

More here:
A-State Drops Heartbreaker in Five at Marshall. Article may or may not reflect the views of KLEK 102.5 FM or The Voice of Arkansas Minority Advocacy Council