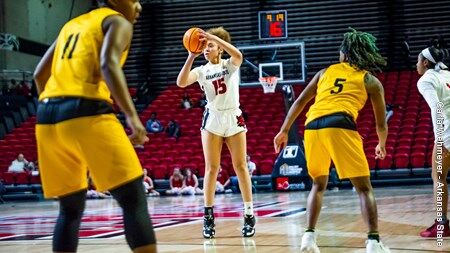 The Red Wolves (5-12, 0-6 SBC) forced over 20 turnovers for the second straight game, but the Bobcats (12-5, 4-2) powered to the win behind four double-digit scorers and a 47.5-percent mark from the floor. Texas State also connected on 11-of-20 from 3-point range for a 55-percent clip.Keya Patton and Anna Griffin led the trio of double-digit scorers for A-State, scoring 13 points each, while Griffin added seven rebounds. Jade Upshaw added 11 points off the bench. Melodie Kapinga grabbed a team-high eight rebounds.

Texas State’s Kennedy Taylor led all players with 21 points on 4-of-8 shooting and 10-of-11 from the charity stripe, leading her team to a 91.7-percent mark at the line. She handed out seven assists and grabbed four rebounds. Tianna Eaton added 13 points, five rebounds and a pair of blocks while Lauryn Thompson and Da’Nasia Hood scored 10 apiece. Hood also grabbed eight boards, helping the Bobcats win the rebounding battle 47-35.

After Texas State led 20-8 through one quarter, A-State battled back to within 10 early in the second quarter. The hosts widened the gap as the half ended, holding a 50-32 lead at intermission.

The Bobcats’ largest lead of the day came with 1:53 remaining in the contest when a Sierra Dickson jumper made it an 89-50 margin. Upshaw closed out the game with a layup and 3-pointer to end it.

A-State continues its four-game road swing Thursday, Jan. 19, at South Alabama (4-13, 0-6). Tip-off against the Jaguars inside the Mitchell Center is set for 7 p.m. CT on ESPN+. The radio broadcast can be heard live via the EAB Red Wolves Sports Network station 95.3 and 96.9 The Ticket Radio Network.

Read the original here:
A-State Drops 89-55 Decision at Texas State. Article may or may not reflect the views of KLEK 102.5 FM or The Voice of Arkansas Minority Advocacy Council