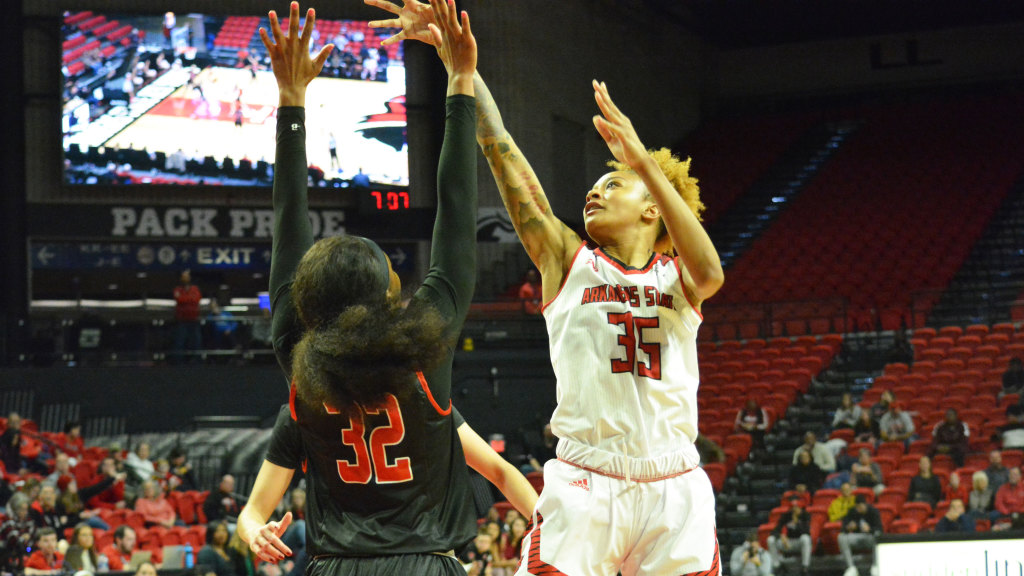 Peyton Martin led the Red Wolves (1-2) with a season-high 19 points and nine rebounds, but SEMO (3-0) remained unbeaten on the year with the help of a pair of 20-point scorers led by Tesia Thompson’s game-high 26 points and 21 from Jessie Harshberger, who hit three-of-four from deep. Carrie Shephard added 19 to round out the Redhawks’ double-digit scorers.

Jireh Washington continued her strong start to the year with 17 points and seven boards while Payton Tennison tallied 12 points on 5-of-10 shooting (2-of-5 from three). Morgan Wallace dished out a team-high five assists while also swiping three steals.

The Redhawks out-rebounded A-State 52-38, but the Red Wolves did a solid job of taking care of the ball, giving up a season-low seven turnovers. The Scarlet and Black also improved at the charity stripe, sinking 10 of 14 free throws.

SEMO opened up the game on an 8-1 run, but Peyton Martin recorded A-State’s first field goal of the night before converting the and-one to make it 8-4.

The Redhawks then stretched their lead out to 16 with a 12-0 run to make it 20-4 before Martin closed out the quarter by hitting a jumper just outside the paint with three seconds left. SEMO led 20-6 after the first 10 minutes.

A-State started the second quarter making just one of its first five shots, but heated up as the media timeout grew closer, with Tennison connecting on back-to-back buckets followed by an inside score by Trinitee Jackson, who scored eight points to go along with six rebounds.

The Red Wolves continued to claw their way back, with Tennison draining the team’s first trey of the night followed by a strong putback by Washington to cut SEMO’s lead to 10 at 31-21 with under three and a half minutes left. The Redhawks would then respond with a 9-0 run to stretch their lead out to 40-21 with just over a minute left and force an A-State timeout.

A-State brought more energy out of the timeout, riding an 8-0 run to close the half. After Martin scored another bucket inside, Tennison connected from deep again. Then, the Red Wolves forced a costly turnover SEMO turnover on a traveling call, which led to Washington’s buzzer-beating three to pull A-State to within 11 at the break.

After being outscored 20-6 to start the game and held as much as a 19-point lead in the contest, the Red Wolves battled back in the second and third quarters, edging the Redhawks 47-41 over that stretch.

A-State opened the second half making its first five shots, but the Redhawks seemingly responded to each bucket with a score of their own to maintain a double-digit lead midway through the third.

A three by Kayla Williams followed by a mid-range jumper by Tennison pulled A-State to within eight through the first 30 minutes.

After SEMO scored four straight to open the fourth, Martin rattled home a trey to cut the deficit back to single-digits. However, with every made A-State basket, the Redhawks had an answer, going on a 6-0 run late to extend the lead out to 15 before the Red Wolves closed on a 5-2 run to end the night.

The Red Wolves now hit the road for a four-game stint to close out the first month of play, making their first stop in Chicago at the Maggie Dixon Classic hosted by DePaul. There, A-State will open the four-team tournament at 11 a.m. CT on Friday, Nov. 22, against the perennial powerhouse Blue Demons at McGrath-Phillips Arena. On Saturday, A-State will battle either nationally-ranked Miami or North Carolina A&T with time to be determined. Friday’s game against DePaul will be streamed live on the Blue Demons’ website with radio coverage on 95.3 The Ticket.

Original article source: http://www.astateredwolves.com//ViewArticle.dbml?DB_OEM_ID=7200&ATCLID=211816005 | Article may or may not reflect the views of KLEK 102.5 FM or The Voice of Arkansas Minority Advocacy Council