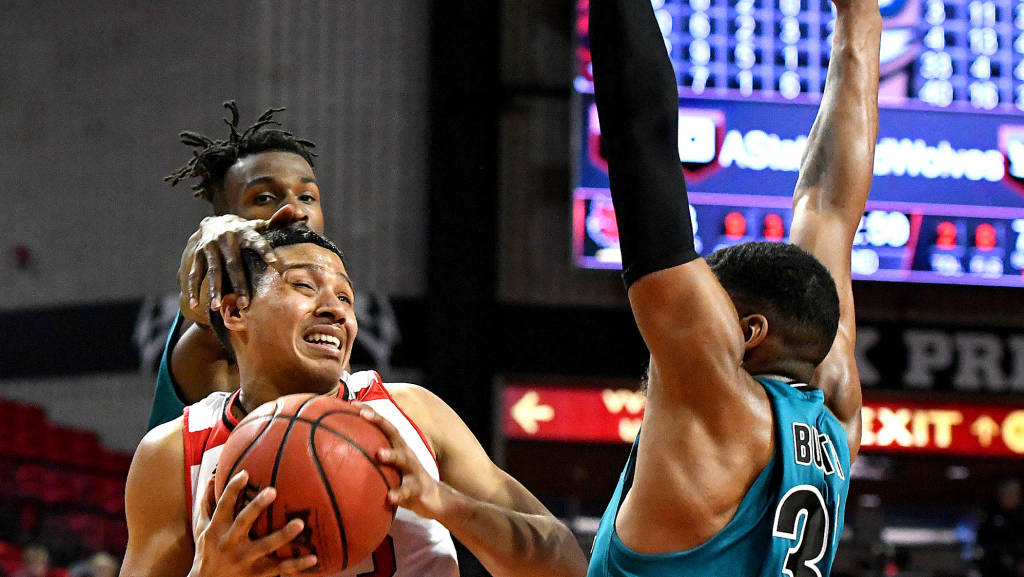 “Give credit to Coastal Carolina – they came in and played a great game,” said A-State head coach Mike Balado.  “We were almost even on the glass, but they outrebounded us, and that is not our staple.  Our defense wasn’t very good tonight.  We can’t get in a hole, 13 points at halftime, and expect to come back and win the game, every game – we’ve got to stop doing that.  We’ve got a week to get prepared for Little Rock, so we’ve got to move on and try to get better.”

A-State, which shot just 40 percent in comparison to the Chanticleers’ 48.3 mark, now stands 9-11 on the year and 3-5 in Sun Belt action.  Coastal Carolina won its third consecutive game to improve to 10-9 overall and 4-3 in league play.

The Red Wolves were led by senior forward Tristin Walley with 14 points, while sophomore forward J.J. Matthews added nine and narrowly missed a double-double with a career-high nine rebounds as well.  Cockfield entered the game averaging 21.5 points and had posted at least 16 in nine straight outings, but was only able to connect on two shots and a pair of free throws.

Arkansas State led just once, 6-5 early in the contest, as Coastal Carolina was able to open up a 12-point advantage at 24-12 with 11:10 left in the first half.  The Red Wolves responded with a 9-0 run over the next four minutes and still trailed by just three, 26-23, with 5:30 remaining for the break.

However, Coastal Carolina scored 14 of the final 18 points in the opening half to take a 40-27 lead into the break.  A-State pulled back within 48-41 at the 14:35 mark of the second half, but couldn’t get any closer the rest of the way.

The Chanticleers had four players score in double figures, including Zac Cuthbertson and DeVante Jones both with a game-high 16 points, and connected on 10-of-21 three-point attempts.  Conversely, A-State connected on just 5-of-23 shots from beyond the arc, while also giving up four more rebounds to Coastal Carolina.

Arkansas State returns to action with a 5:30 p.m. road game Saturday, Feb. 2, against Little Rock. For the latest on A-State men’s basketball, follow the Red Wolves on Twitter @AStateMB, at Facebook.com/AStateMB and on Instagram at ‘AStateMB’.

Original article source: http://www.astateredwolves.com//ViewArticle.dbml?DB_OEM_ID=7200&ATCLID=211788076 | Article may or may not reflect the views of KLEK 102.5 FM or The Voice of Arkansas Minority Advocacy Council