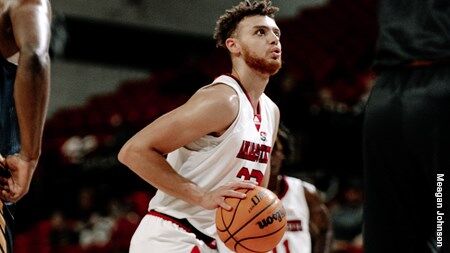 JONESBORO, Ark. (1/5/23) – The Arkansas State men’s basketball team saw Omar El-Sheikh collect his fourth consecutive double-double Thursday against South Alabama, but the Red Wolves couldn’t overcome a tough shooting night in a 63-45 setback to the Jaguars at the Mitchell Center.

South Alabama put the first eight points on the scoreboard before Arkansas State responded with a 15-4 run to grab a 15-12 lead midway through the opening half.  However, the Red Wolves were able to connect on only one of their final 13 shots in the first half and went into the break trailing 29-18.

A-State couldn’t find the mark on its first three shots of the second half as well, while South Alabama connected its first two field goal attempts to extend its advantage to 33-18.  Still trailing by 15 points, 38-23, with 15:25 remaining, the Red Wolves went on a quick 4-0 run to pull back within 11, but couldn’t get any closer.

The Jaguars were led by three players scoring in double figures, including guard Isaiah Moore with a game-high 20 points.  Kevin Samuel added a double-double for the Jaguars, posting 12 points and 11 rebounds.

Arkansas State returns to action Saturday, Jan. 7, with a 4:00 p.m. game at Troy.  The contest will appear on ESPN+, and every A-State men’s basketball game can be heard live on the EAB Red Wolves Sports Network, including flagship station 107.9 FM in the Northeast Arkansas area.

Continued here:
A-State Drops 63-45 Decision at South Alabama. Article may or may not reflect the views of KLEK 102.5 FM or The Voice of Arkansas Minority Advocacy Council