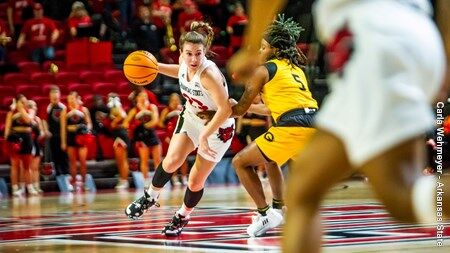 JONESBORO, Ark. (1/7/23) – A 3-pointer with under three seconds remaining rimmed out for the Arkansas State women’s basketball team Saturday afternoon, resulting in a 59-58 loss to Appalachian State inside First National Bank Arena.

Izzy Higginbottom led all players with 16 points, as every player who saw the floor for both sides factored into the scoring column. The Batesville, Ark., native made four field goals and went 7-for-8 at the free-throw line. Lauryn Pendleton added 13 points off the bench on 5-of-9 from the field for her fourth consecutive game with 10-plus points. A-State shot 35.1 percent (20-57) as a team, going 6-for-15 (40.0%) from 3-point range and 12-of-14 at the foul stripe, shooting 85.7 percent.

Melodie Kapinga led all rebounders with eight, while Anna Griffin added seven to go along with six points.

Janay Sanders was the lone Mountaineer in double figures, scoring 13 points, but was one of four players with eight or more in the contest. App State won the rebounding battle 40-34 and shot 40.4 percent (23-57) from the field, but was limited to just 17.6 percent (3-17) from deep.

A-State held the Mountaineers to just 1-for-9 from the field to start, but went cold in the while the visitors took advantage of trips to the free-throw line. App State held the Red Wolves without a field goal for over four minutes, but three free throws by Higginbottom with less than a second on the clock gave the Scarlet and Black a 14-13 edge after one.

The Mountaineers took a three-point lead early in the second quarter on a layup by Alexis Black before A-State retook a one-point advantage on a Kapinga basket. However, App State went on a 7-0 run in which it held the Red Wolves scoreless for over four minutes. The Mountaineers led by eight on an Emily Carver trey, but Mailyn Wilkerson answered on the other end with a 3-pointer with 10 seconds left to cut the halftime deficit to 32-27.

That margin grew to 10 early in the second half, but A-State went on a 9-0 run to pull within one on a trey by Higginbottom followed by a hook shot from Kiayra Ellis to force an early App State timeout. The Red Wolves took a 43-39 lead when a 15-2 run was capped by a Pendleton trey, but the Mountaineers answered with six straight to reclaim a 45-43 advantage. A-State, which shot 64.3 percent in the quarter, clung to a 48-45 lead after three when Jade Upshaw drilled a corner three with 32 seconds left.

App State tied it early in the fourth on a three-point play by Sanders, but A-State reclaimed a one-score lead on a jumper by Leilani Augmon. After a pair of free throws by Higginbottom, the Mountaineers went on a 7-0 run to lead 57-52 with 5:40 to play. A Wilkerson trey and Higginbottom jumper once again tied it at 57 with 4:25 left.

Both teams were held scoreless for over three minutes, with a Carver layup ending the drought for App State with 2:11 to go and making it 59-57. At the 1:22 mark, Higginbottom converted 1-of-2 at the charity stripe to trim the deficit to what would be the final score, but A-State had a chance at the game-winner with frontcourt possession with 10 seconds to go. The Red Wolves looked for a shot at the rim, but a 3-point attempt fell short and into Mountaineer hands to close out the contest.

The Red Wolves begin a four-game road swing Thursday, Jan. 12, at Southern Miss. Tip-off against the Lady Eagles inside Reed Green Coliseum is set for 6 p.m. CT on ESPN+. The radio broadcast can be heard live via the EAB Red Wolves Sports Network station 95.3 and 96.9 The Ticket Radio Network.

Read more from the original source:
A-State Drops 59-58 Heartbreaker to App State. Article may or may not reflect the views of KLEK 102.5 FM or The Voice of Arkansas Minority Advocacy Council