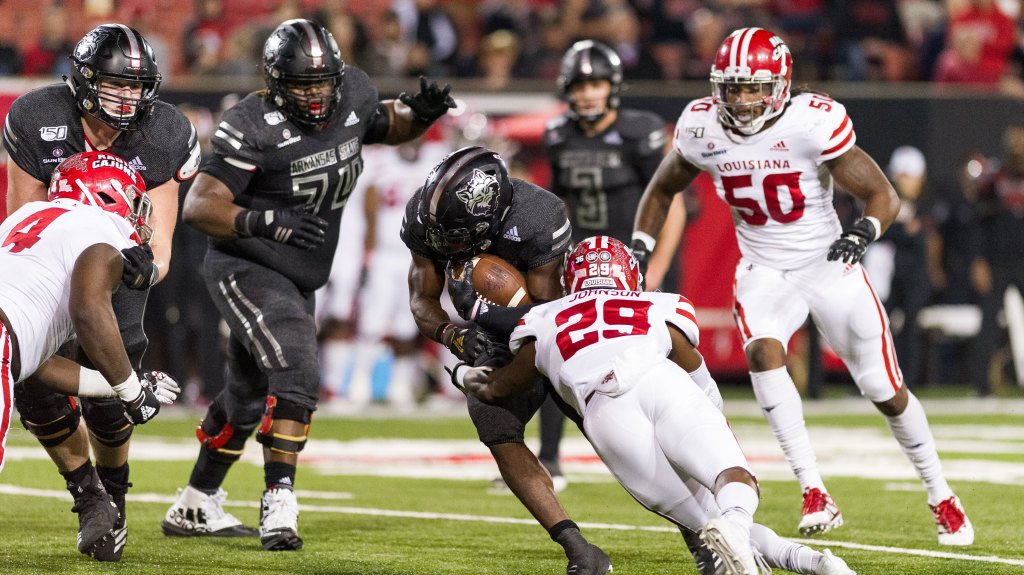 The Red Wolves (3-4, 1-2 Sun Belt Conference) battled back from a two-touchdown halftime deficit to cut the deficit to four early in the fourth quarter, but the Ragin’ Cajuns (5-2, 2-1 SBC) utilized their stout running game to extend the lead and grab two more late scores to take the victory.

“I loved the energy that the guys came out with early,” head coach Blake Anderson said. “We had good energy on both sides of the ball to drive the length of the field and score and then get some stops early. We threw guys in there and they responded well. I felt that the changes we made schematically kept us in the mix and we did the right things. It’s still not what we wanted, but obviously a big improvement. I’m proud of how the guys fought to get it to a four-point game and they kept battling. We just didn’t do enough to get the win, so give (Louisiana) credit. They had a good game plan and used their strengths to keep us off-balance.”

Marcel Murray posted a career day on the ground, rushing for 164 yards on 35 carries while Omar Bayless notched another strong receiving night with nine catches for 150 yards. Bayless’ performance gave him over 2,000 receiving yards in a career, making him the fifth all-time A-State player to accomplish the feat. He also broke the school record with his sixth 100-yard game of the year.

The Red Wolves opened up on their own 5-yard line after a kneel down instead of a fair catch call, but that did not matter as Layne Hatcher guided the offense on a methodical 12-play, 95-yard drive to put A-State on top early 7-0. Hatcher connected on five of his six passes on the drive and found Brandon Bowling in the back of the end zone for a 10-yard strike. The score marked the first career touchdown reception for Bowling. Murray churned out 21 yards on six carries on the ground, one of which extended the drive to set up the score two plays later.

With 11 seconds left in the first quarter, the Ragin’ Cajuns knotted up the game at 7-all when a one-yard run by Trey Ragas capped off a nine-play, 74-yard drive.

Hatcher again led A-State on a lengthy drive that stretched from the end of the first quarter until the nine-minute mark in the second, taking over six minutes on a 16-play, 71-yard drive. Blake Grupe closed out the drive with a 25-yard field goal to give the Red Wolves a 10-7 lead. Murray ran the ball eight times for 28 yards, while Hatcher found Omar Bayless for a 15-yard connection early in the drive.

Louisiana took the lead on the ensuing drive, with Levi Lewis leading his offense on a nine-play drive capped off by an 11-yard rush by Elijah Mitchell to give the Cajuns a 14-10 lead. Mitchell rushed for 38 yards on just six attempts during the drive.

The Ragin’ Cajuns stretched that lead to two scores when Raymond Calais ripped off an 80-yard rush, followed by a 25-yard field goal by Stevie Artigue to make it 24-10 at the half.

On the opening drive of the second half, Louisiana threatened deep in A-State territory, but Jeremy Smith came up with a key interception of a Lewis pass to hand possession back to the Red Wolves on the 2-yard line. Murray then took the first five plays 35 yards on the ground, including a 19-yard scamper immediately following the change of possession.

The Red Wolves clawed to within four when Hatcher found Kirk Merritt on a reverse pass that started with Murray taking the snap. After Merritt took the handoff, he flipped it to Hatcher who connected with Merritt on an acrobatic grab in the front corner of the end zone. With 11:35 left in the game, Louisiana held just a 24-20 lead.

Louisiana responded on the next drive with a clock-consuming 12-play drive led by eight rushes by Mitchell, who capped off the scoring drive with his second touchdown of the night from one yard out. However, Artigue’s extra point shanked off the upright, putting the score at 30-20 in favor of the Ragin’ Cajuns.

The Red Wolves looked to score on the next drive, working close to midfield, but a turnover on downs gave Louisiana prime field position just across the 50. Two plays later, Calais scampered 38 yards to add seven more to the deficit at 37-20 with 3:18 remaining.

After Hatcher found Bayless for catches of 17 and 49 yards that got the Red Wolves down to the Louisiana 6, Asjlin Washington picked off a Hatcher pass in the end zone to halt the A-State drive. The Ragin’ Cajuns went on to run out the clock and claim the victory.

On special teams, Cody Grace again shined in the punting game, averaging 49.2 yards per kick and sending two 50 or more yards, including one that traveled 75 yards. That marked the fifth-longest punt in school history and the longest by a Red Wolf since 1995.

Defensively, Darreon Jackson led the way with a game-high 15 total tackles, a new career high for the defensive back.

The Red Wolves continue their home stand on Saturday, Oct. 26 hosting Texas State for homecoming. Kickoff against the Bobcats is slated for 6 p.m. CT and will be aired live on ESPN+.

Original article source: http://www.astateredwolves.com//ViewArticle.dbml?DB_OEM_ID=7200&ATCLID=211814530 | Article may or may not reflect the views of KLEK 102.5 FM or The Voice of Arkansas Minority Advocacy Council