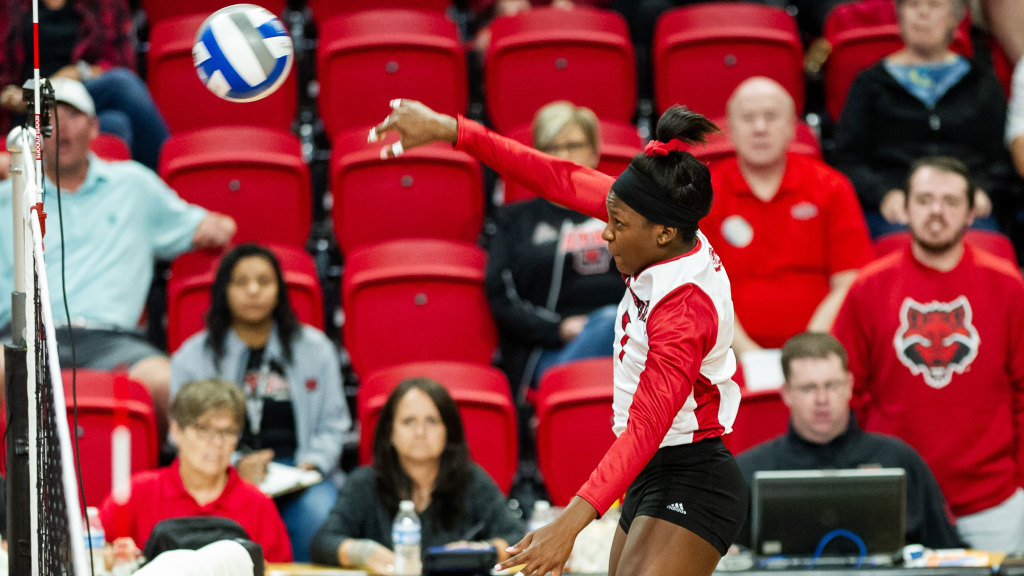 Terrell led A-State (11-6, 2-3 SBC) with 16 kills and five total blocks, matching her season-bests in both categories. The 16 kills tied her career high set on Sept. 12 against Stephen F. Austin. The Mountaineers (9-9, 5-0) remained unbeaten in Sun Belt Conference play with the win, led by Emma Longley’s double-double effort of 20 kills and 11 digs.

Julianna Cramer notched her fifth double-double of the year and her second in the last three matches with 25 assists and a team-high 13 digs. Malgorzata Andersohn also tallied a double-double off the bench, dishing out 13 assists and collecting 13 digs to match Cramer’s team-high. A-State led in the service game, serving up seven aces to Appalachian State’s two. Three Red Wolves served a pair of aces on the night.

A-State also led at the net with 11 blocks as a squad, with Terrell leading the way with five. Kendahl Davenport added four more to continue her strong rookie campaign.

The match started with App State taking the first two sets, but the Red Wolves managed a comeback effort to claim the third. However, the Mountaineers would hold off the Scarlet and Black in the fourth to claim the victory.

Set 1 – Appalachian State 27-25
The Mountaineers mounted to an early lead in the opening set, but a 4-0 run by Arkansas State put the Red Wolves ahead 7-4 after a pair of aces by Andersohn. A Macey Putt ace increased A-State’s lead to 9-5, but the Mountaineers would inch closer as the set progressed.

With A-State lead 19-14, the Mountaineers took seven of the next nine points to knot up the score at 21-all. The Red Wolves retook the lead at 23-21 on a kill by Putt and ace by Hannah Cox, but App State would go on to claim six of the final eight points to take a 1-0 lead in the match with a tight victory in the opening set.

Putt and Terrell led A-State with four kills in the opening frame, with Cramer handing out eight assists.

Set 2 – Appalachian State 26-24
A kill by Cramer gave Arkansas State early momentum to start the second set, although App State managed to keep A-State’s lead to no more than three. After serving an error to make it 7-4 in favor of the Red Wolves, the Mountaineers went on an 11-2 run to take a 15-9 lead.

Terrell added four more kills to her credit in the set, while Cramer added six assists.

Set 3 – A-State 25-17
Much like the first two sets, the Red Wolves would not go down without a fight, bouncing back to extend the match behind six more Terrell kills.

After the Mountaineers took the opening point, A-State used a 5-0 run fueled by kills by Terrell, Peyton Uhlenhake and Josie Stanford to take a 16-9 lead that would hold throughout the set.

Set 4 – Appalachian State 25-15
The Red Wolves kept things tight in the opening part of the fourth set, but App State’s 5-0 run that increased the deficit to 12-5. The Mountaineers would take their largest lead of the match at 10 when they moved ahead 22-12 on a kill by Victoria Wilform.

A-State would then reclaim some momentum with a 3-0 run on kills by Stanford and Paulina Sobolewska, but the Mountaineers closed out the match with a 3-0 run of their own to remain unbeaten in league play in 2019.

The Red Wolves close out their four-match home stand Saturday night against the other Sun Belt unbeaten, Coastal Carolina, at 6:30 p.m. CT at First National Bank Arena. Fans are asked to bring two canned good items for A-State Food Pantry Night. Those who donate will receive a voucher to receive a free ticket for the next home match (Nov. 1, 6:30 p.m.).

Original article source: http://www.astateredwolves.com//ViewArticle.dbml?DB_OEM_ID=7200&ATCLID=211814039 | Article may or may not reflect the views of KLEK 102.5 FM or The Voice of Arkansas Minority Advocacy Council