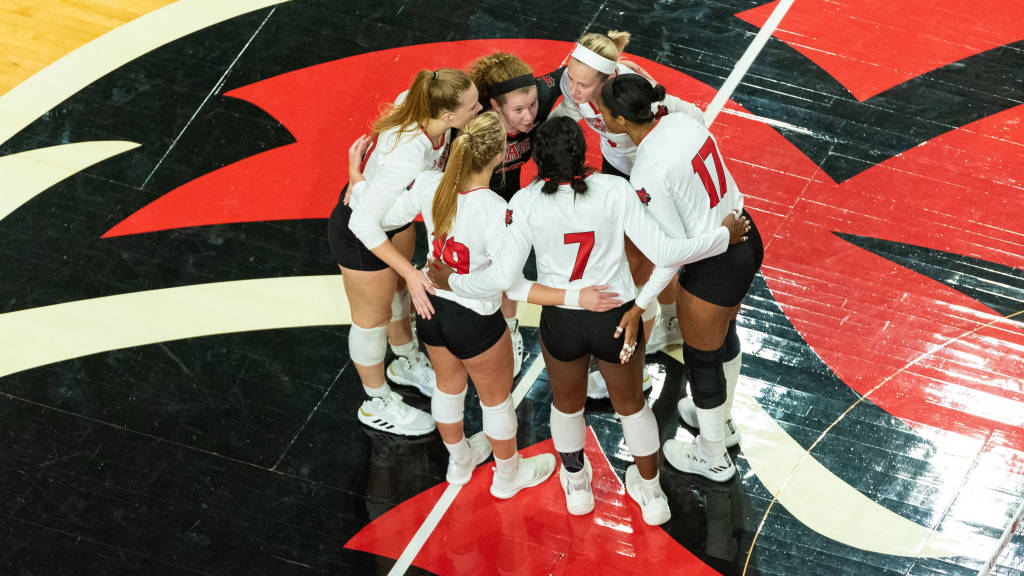 TROY, Ala. (9/26/19) – On Thursday night at Trojan Arena, the Arkansas State volleyball team dropped a tough 3-1 decision to Troy in the opening match of Sun Belt Conference play for both teams.

A-State (9-4) saw another double-double performance by Peyton Uhlenhake (10 kills, 11 digs), but the Trojans (11-2) showcased a high-powered offense that hit .299 as a squad to take the four-set victory.

Set 1 – A-State 25-21
Arkansas State got out to a quick start, mounting to a 10-6 lead and forcing a Troy timeout. Out of the break, the Red Wolves extended that lead to 13-7 on a Cramer kill before the Trojans fought back to cut the deficit to one at 18-17 on a kill by Cheyenne Hayes.

A 3-0 run stretched that advantage to 21-17 and the Red Wolves were able to hold off the Trojans and claim a tight opening set.

Putt led the way with five kills in the set, including the one that ended the set in favor of the Scarlet and Black. Uhlenhake added three, while Andersohn dished out six assists. Uhlenhake also notched a set-high five digs on the defensive end, while Kendahl Davenport and Timber Terrell teamed up for a pair of blocks.

Set 2 – Troy 25-20
The Trojans bounced back to take an early 4-0 lead that forced Restrepo to take a timeout. Out of the break, Uhlenhake got A-State on the board with her fourth kill of the evening. Troy’s largest lead came when an A-State attack error made it 10-4 Trojans, but the Red Wolves went on an 8-2 run fueled by two kills and a block by Terrell to knot things up at 12-all.

Troy claimed back-to-back points to move ahead 18-16 and went on to take the back-and-forth set, evening up the match at 1-all with a 25-20 decision.

Putt added to her total with three more kills, while Terrell led A-State with five kills and two more blocks in the stanza.

Set 3 – Troy 25-21
Troy got off to another quick start, taking a 3-0 lead before A-State knotted up the set at 5-all. From there, the Trojans never led by more than four after the Red Wolves once again tied up the set at 15 on a kill by Uhlenhake. A-State would cut the deficit to 23-21 on a Troy attack error, but the Trojans would take the next two points on kills by Hayes and take a 2-1 lead in the match.

Uhlenhake was A-State’s kills leader in the third set, recording four while Terrell notched three and Josie Stanford added two. Davenport added two more blocks to her total on the defensive side.

Set 4 – Troy 25-14
The Trojans rode the momentum from the previous set to take another early 3-0 lead, one that they would hold throughout the set en route to clinching the match with a 25-14 fourth-set decision.

Terrell led A-State with three kills while Madison Brown added two to give her a total of eight on the night. Brown led the Red Wolves with a .389 attack percentage (minimum 8 kills) on the night.

Troy was led by Cheyenne Hayes’ double-double effort (16 kills, 10 digs) in addition to 13 kills from Halston Hillier and a double-double by Ashley Guenveur (10 kills, 14 digs). Amara Anderson led all setters with 47 assists.

The Red Wolves close out the road trip to open conference play on Friday night at 6:30 p.m., traveling to Mobile to face South Alabama. Friday’s match will mark the conference opener for the Jaguars (8-5).

Original article source: http://www.astateredwolves.com//ViewArticle.dbml?DB_OEM_ID=7200&ATCLID=211812724 | Article may or may not reflect the views of KLEK 102.5 FM or The Voice of Arkansas Minority Advocacy Council