A-State Downed by Jaguars in Three 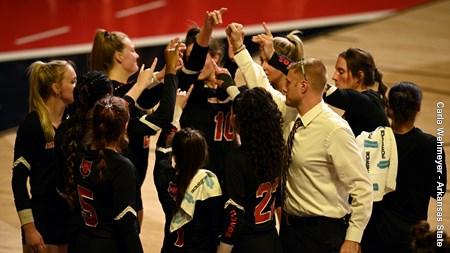 SET 1 – SOUTH ALABAMA 25, A-STATE 20
The Red Wolves started off strong, matching USA point for point for much of the early phases of the opening set before the Jaguars pulled ahead with a 7-1 run. A-State clawed back to tie it at 16-all on Harris’ ace, then led 18-17 on a USA attack error. South Alabama closed the set by taking eight of the last 10 points to take a 1-0 lead in the match.

SET 2 – SOUTH ALABAMA 25, A-STATE 15
South Alabama took an early 5-2 lead in the second set, but A-State battled back to tie it at 5-5 on kills by Wiersema and Putt, followed by a solo block by Yazmyn Billings. The Jaguars then surged ahead 12-7 after a Reeves ace before pushing out to their largest lead of the set at 24-14. A kill by Ilayda Dincer saved a set point before Hannah Maddux ended the set with one of her match-high 13 kills.

SET 3 – SOUTH ALABAMA 25, A-STATE 14
The Jaguars took the first five points of the third set, and 12 of the first 15 before Arkansas State got back-to-back kills by Putt to cut it to 12-5. USA then pushed its lead out to a dozen before an attack error and kill by Dincer cut it back down to 10 and 19-9. South Alabama led 24-11 after a Maddux ace, but A-State kept the match alive by saving three set points before the Jaguars clinched the match on a kill by Evie Taylor.

Arkansas State continues its four-match home stretch Friday, hosting the Jaguars to close out the two-match series. First serve is set for 6 p.m. and the match will be broadcasted live on ESPN+.

More here:
A-State Downed by Jaguars in Three. Article may or may not reflect the views of KLEK 102.5 FM or The Voice of Arkansas Minority Advocacy Council