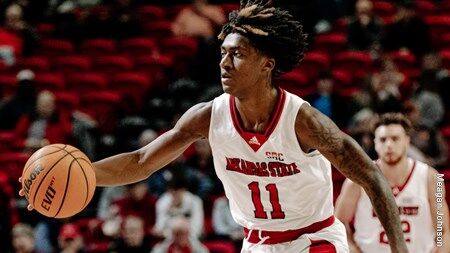 The Red Wolves rallied from a 13-point second-half deficit, improving their record to 8-5 overall and 8-1 on their home court.  Little Rock, which got a career-high 30 points from guard Jordan Jefferson, saw its record move to 4-9.

Ford scored 16 of his 25 points in the second half and also dished out a game-high five assists, while El-Sheikh finished with a career-high 25 points and season-best 15 rebounds.  Although no other A-State player scored in double-figures, Caleb Fields and Markise Davis both recorded eight points.

Little Rock broke an 11-11 tie just over eight minutes into the game on a Jefferson three-pointer and would hold the advantage until the 8:41 mark in the second half.  The Trojans took a 39-31 lead into the break and extended the margin to 13 points, 55-42, with 14:33 left in the contest.

The Red Wolves put together a 17-3 run, however, over the next six minutes to pull ahead 59-58 for their first lead since early in the contest.  Little Rock responded with 15-7 run of its own, taking a 73-66 advantage with just 2:40 to play before A-State rallied once again.

The Red Wolves scored the next eight points to regain the lead at 74-73.  A layup by Jefferson with 34 seconds to go put Little Rock back on top, but Ford was fouled on a drive 12 seconds later and hit both free throws to make the score 76-75 in favor of A-State.

The Trojans couldn’t connect on a pair of contested layups in the final seconds.  Ford corralled the rebound on the second miss and was fouled with one second remaining.  The freshman guard made the first of two free throws to set the final score.

Arkansas State made just 15-of-28 free throw attempts compared to Little Rock’s 19-of-23 performance at the line, but posted a higher shooting percentage (.483 to .446) and recorded nine more rebounds (40-31).  The Red Wolves also outscored the Trojans 40-28 in the paint and took advantage of 18 offensive boards that it turned into 22 second-chance points.

Arkansas State returns to action Thursday, Dec. 29, opening Sun Belt Conference play on the road with a 6:00 p.m. (CT) game at Old Dominion.  The game will appear on ESPN+, and every A-State men’s basketball game can be heard live on the EAB Red Wolves Sports Network, including flagship station 107.9 KFIN in the Northeast Arkansas area.

Read more here:
A-State Completes 77-75 Comeback Victory over Little Rock for Third Straight Win. Article may or may not reflect the views of KLEK 102.5 FM or The Voice of Arkansas Minority Advocacy Council