A-State Comes up Short in Overtime, 87-78, Against Marshall 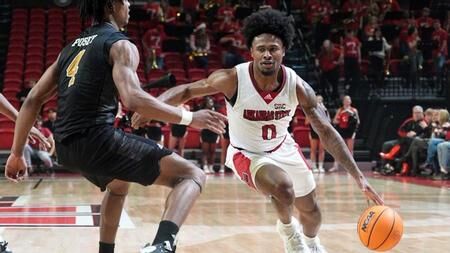 JONESBORO, Ark. (1/21/23) – The Arkansas State men’s basketball team got a double-double from Caleb Fields, a career-high 18 points from Avery Felts and rallied from an 11-point second-half deficit to force overtime, but Marshall outscored the Red Wolves 16-7 in the extra period to escape with an 87-78 victory Saturday at First National Bank Arena.

Fields collected his second career double-double with 17 points and a career-high 10 assists, while adding five rebounds to lead A-State (9-12, 1-7) against a Marshall squad (17-4, 6-2) that won its fifth straight outing to remain tied atop the Sun Belt Conference standings.

Fields and Felts were joined in double figures by two other A-State players, including Markise Davis and Malcolm Farrington with 14 and 12 points, respectively.  Omar El-Sheikh narrowly missed a double-double as well, finishing with nine points and 15 rebounds that tied his season-best total.

A-State put up four more shots and made two more three pointers than Marshall, but the Thundering Herd posted a higher field goal percentage (.484 to .426) and connected on 17 free throws to the Red Wolves’ 10.  While Arkansas State pulled down a season-high 44 rebounds and held a +13-margin on the boards, Marshall committed nine fewer turnovers.

Marshall held a 71-67 advantage with the scoreboard showing 19 seconds, but Davis hit a layup nine seconds later and then Julian Lual picked up a steal and Fields forced overtime with a layup.  The majority of overtime belonged to the Thundering Herd, however, as they scored the first 13 points before going on to the nine-point win.

Marshall was led by three players scoring in double digits, including Andrew Taylor with a game-high 27 points.  Taevion Kinsey added 23 points, all coming in the second half and overtime, and Kamdyn Curfman added 16 for the Thundering Herd.

A-State returns to action Thursday, Jan. 26, with a 7:00 p.m. road game against Southern Miss, which is also tied for first place in the Sun Belt.  The contest will appear on ESPN+, and every Arkansas State men’s basketball game can be heard live on the EAB Red Wolves Sports Network, including 107.9 FM in the Northeast Arkansas area.

More here:
A-State Comes up Short in Overtime, 87-78, Against Marshall. Article may or may not reflect the views of KLEK 102.5 FM or The Voice of Arkansas Minority Advocacy Council