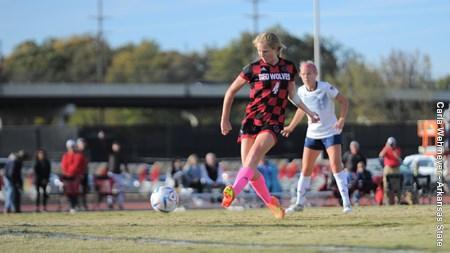 JONESBORO, Ark. (10/27/22) – Goalkeeper Olivia Luther stopped all seven shots she faced on goal and forward Darby Stotts put away her third game-winner of the season in the 58th minute to send the Arkansas State women’s soccer team to a 1-0 victory over South Alabama in the regular season finale Thursday at the A-State Soccer Park.

With the win, A-State improved to 9-5-3 overall and 7-2-1 in Sun Belt Conference play. The Red Wolves handed South Alabama its first loss in league play dropping the Jaguars to 6-1-3 in SBC play and 10-2-6 overall.

Mckenzie Robinson tracked down the ball on the left side of the pitch and served it ahead to Emma Riley where Riley took a touch that deflected off a South Alabama defender and found the feet of Stotts. Gathering the ball at the near post, Stotts took a quick touch and sent the ball to the far corner of the net for her third game-winning goal, all in conference play, and sixth marker of the season. Riley picked up her fifth assist on the year while Robinson was credited with her third.

Luther stopped all seven shots she faced on goal in the match, fending off a relentless attack by South Alabama after the Red Wolves tally. Four of Luther’s seven stops came after A-State took the lead, none bigger than a stop in the final minute on a long-range serve into the box by Kate Nicolson of the Jaguars at 89:16. Luther (8-3-2) registered her fifth shutout on the season, fourth in league play.

The Sun Belt Conference will release the full bracket Thursday night after the completion of all matches. For the latest on A-State women’s soccer, follow the team on Twitter (@AStateSoccer), Facebook (/AStateSoccer) and Instagram (@astatesoccer).

Continued here:
A-State Closes Out Regular Season with 1-0 Win over South Alabama. Article may or may not reflect the views of KLEK 102.5 FM or The Voice of Arkansas Minority Advocacy Council