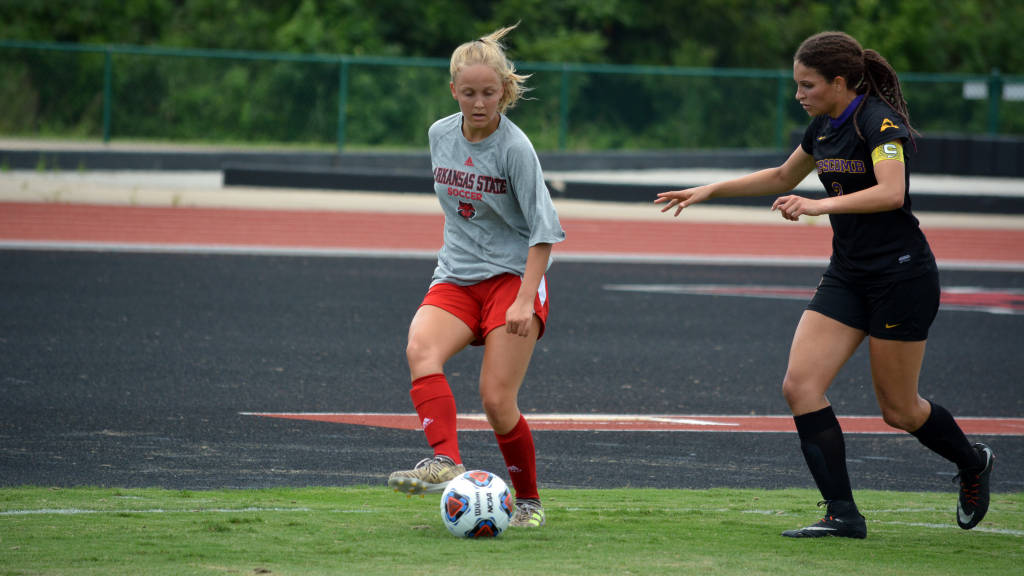 JONESBORO, Ark. (8/10/18) – After a week’s worth of practices, the Arkansas State soccer team opened up the competition slate with a 1-0 exhibition win over Lipscomb Friday afternoon at the A-State Soccer Park.

Senior Taylor Schneider provided the match’s only goal in the 71st minute when she collected a rebound in front of the net and put away the attempt as the Red Wolves held on over the 20 minutes of play to preserve the one goal lead.

“It was a good result for our first competition against someone other than ourselves,” A-State head coach Brian Dooley said. “We had a lot of kids get playing time today and we were able to identify certain areas of our game that we feel good about and other areas that need improvement.”

Lipscomb held a 16-2 advantage in shots, but A-State made the most of its opportunities with Amy Andrea sending a shot into a dangerous spot early in the second half before Schneider was able to put away her only attempt on the day.

The Red Wolves’ defense helped control the possession for much of the first half, but began falter in the second half but was aided by the outstanding play of sophomore keeper Megan McClure.

The Webster Groves, Mo., native made six saves in the second half, include one in the game’s final minutes the prevented the Lady Bisons from tying the match.

The Red Wolves will open the regular season on Thursday, Aug. 16 when they welcome UT Martin to the A-State Soccer Park. Kick-off is set for 4 p.m.

Original article source: http://www.astateredwolves.com//ViewArticle.dbml?DB_OEM_ID=7200&ATCLID=211767863 | Article may or may not reflect the views of KLEK 102.5 FM or The Voice of Arkansas Minority Advocacy Council