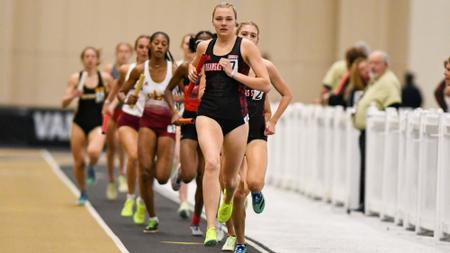 A-State’s women’s DMR performance would not be the last strong distance performance of the night, as Meyer later clocked a time of 16:57.67 to win the women’s 5000 meters by over 30 seconds. Her time ranks fourth in school history.

Camryn Newton-Smith, in her first collegiate event of the season, moved into second in program history in the long jump, leaping 6.16m/20-2.5 in a first-place finish. In the men’s long jump, reigning Sun Belt Conference Men’s Field Athlete of the Week and fellow Aussie Colby Eddowes continued his strong rookie campaign with a mark of 7.53m/24-8.5, placing fifth.

The Red Wolves return to the Vanderbilt Recreation Center Saturday for the second day of the Vanderbilt Invitational, beginning at 10 a.m. with the men’s shot put. Action will be broadcasted live on SEC Network+.

Read the original here:
A-State Breaks Women’s DMR Record Friday at Vanderbilt Invitational. Article may or may not reflect the views of KLEK 102.5 FM or The Voice of Arkansas Minority Advocacy Council