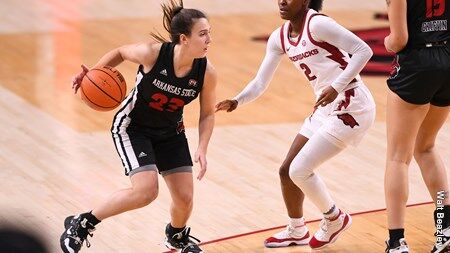 FAYETTEVILLE, Ark. (12/11/22) – In the final game of a three-game road swing and facing a top-25 foe, the Arkansas State women’s basketball team hung tough but ultimately dropped a 77-63 decision at No. 21/22 Arkansas Sunday inside Bud Walton Arena.

A-State (4-5) limited the Razorbacks (12-0) to their lowest 3-point field-goal percentage of the season (21.4 percent) and just 33.3 percent overall in the second half. Izzy Higginbottom led the Red Wolves with a game-high 19 points on 7-of-17 shooting, giving her 10 or more points in all nine games this season.

Arkansas surged out to an early 8-2 lead, but A-State found success on the offensive end to trim the deficit to 14-13 midway through the first on a Leilani Augmon jumper. The Red Wolves shot 60 percent from the floor in the quarter, including a pair of Wilkerson treys to trail 24-23 after one.

After back-to-back layups pushed the hosts’ lead out to five, a Kapinga layup followed by a Pendleton 3-pointer tied up the contest at 28-all. The Razorbacks closed the half on a 9-2 run to lead by 10, but Higginbottom battled for a field goal with 22 seconds remaining to make it a 43-35 contest at half.

Arkansas opened the second half with eight unanswered to open up a 16-point lead before Anna Griffin drilled a trey to end the run. The Red Wolves chipped away at the deficit down the stretch, cutting it to nine when Higginbottom knocked in a contested layup to put the score at 60-51 Razorbacks after three.

Back-to-back treys by Pendleton and Wilkerson pulled A-State within six with seven minutes to play, but Arkansas responded to push its lead back out to 11 on a three by Spencer. A-State cut the margin to 10 on four Higginbottom free throws, but the Razorbacks closed out the affair with four at the line.

Arkansas State returns home for its lone December home outing, hosting Grambling State at 7 p.m. Thursday. The game will be broadcasted live on ESPN+ and the radio broadcast can be heard live via the EAB Red Wolves Sports Network station 95.3 and 96.9 The Ticket Radio Network.

Read the original here:
A-State Battles at 21st-Ranked Arkansas. Article may or may not reflect the views of KLEK 102.5 FM or The Voice of Arkansas Minority Advocacy Council