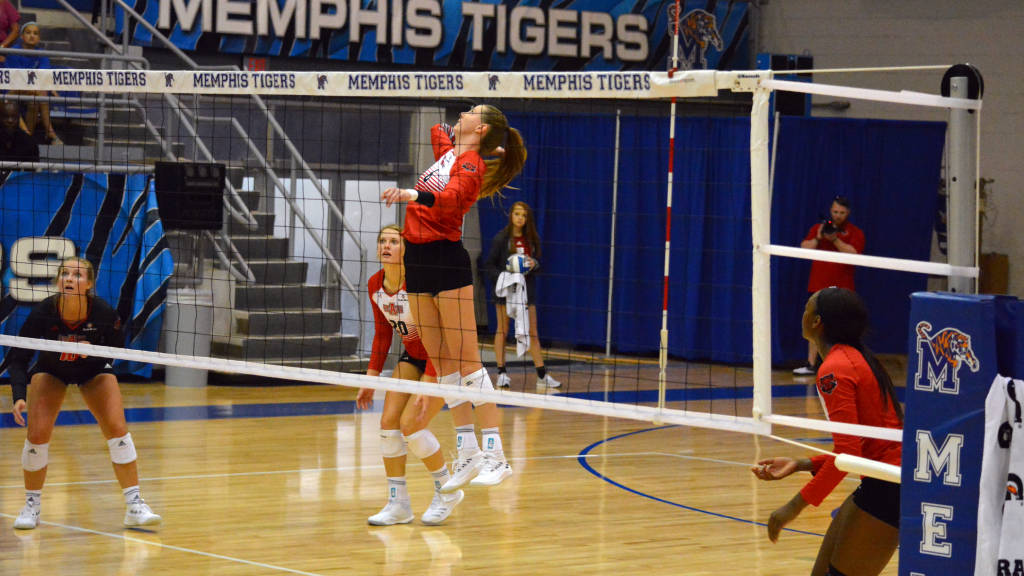 A-State trailed 2-0 after the first two sets, but rallied for back-to-back wins in the third and fourth sets to force a decisive fifth set. The Mountaineers used a 7-0 run to build a 9-1 advantage in the final frame, but A-State responded and closed within 10-6 after and ace and kill by Carlisa May that forced a timeout.

Appalachian State pushed their lead to 14-7 coming out of the timeout, but the Red Wolves continued to fight off the next three match points before an attack error gave the Mountaineers the set and the match at 15-10.

“We did some good things in the third and fourth sets, but in the fifth set we just dug ourselves too deep of a hole to recover him,” A-Sate head coach David Rehr said. “We are doing some good things at times, but we haven’t been able to put together a complete match over the last two weeks. We need to continue to work hard in practice to correct our mistakes and get back to the level that we expect of ourselves.”

After dropping the first two sets, Arkansas State responded out of the intermission break in the third set by matching Appalachian State point-for-point in the early stages. A 3-0 run pushed the A-State lead to 15-12, before the Mountaineers rallied to tie the set at 19-19.

A-State went up 23-21 out of a timeout, but App State again fought back to tie the set at 25-25, before back-to-back kills by Josie Stanford and Madison Turner put the set away.

The fourth set followed much of the same flow as the third set as both team traded points in the early going, but the Mountaineers forged ahead with a 16-12 lead. The advantage grew to 20-15, before a 3-0 run got the Red Wolves within 20-18 on a kill by Peyton Uhlenake.

The Red Wolves tied the match at 22-22 and took a brief lead at 24-23 on one of May’s 19 kills on the afternoon. App State tied the match twice more at 24-24 and 25-25 before back-to-back attack errors by the home squad helped A-State even the match at two games each.

Macey Putt finished the match with a 16 kill performance, while Turner tied a season-high with 10 kills. Setter Ellie Watkins recorded a double-double with 48 assists and 10 digs. Tatum Ticknor led the team with 19 digs, while Kenzie Fields added 14.

Arkansas State returns home for a two-match home stand on Oct. 12-13 when they will take on Louisiana and ULM. First serve against the Ragin’ Cajuns on Friday evening is set for 6:30 p.m.

Original article source: http://www.astateredwolves.com//ViewArticle.dbml?DB_OEM_ID=7200&ATCLID=211775095 | Article may or may not reflect the views of KLEK 102.5 FM or The Voice of Arkansas Minority Advocacy Council