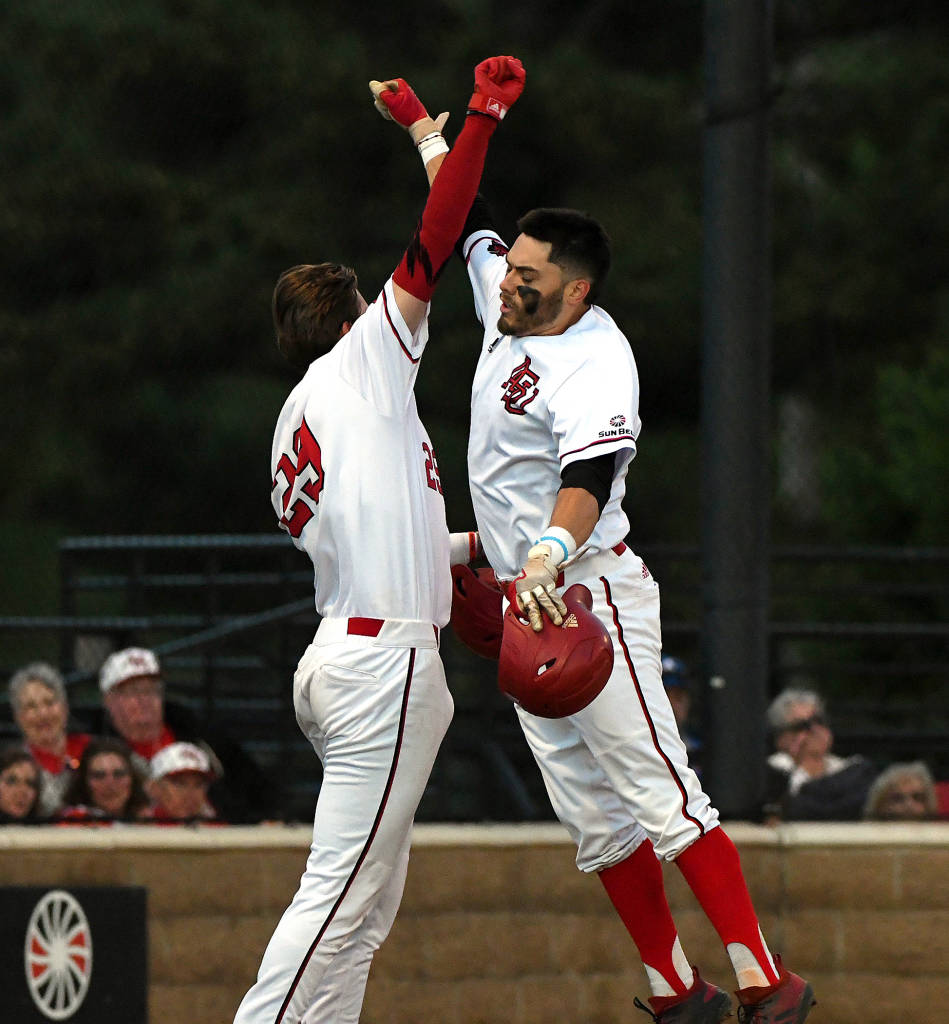 The last meeting happened on April 2, the baseball team fell 4-3. A-State loaded the bases in the bottom of the ninth when Tyler Duncan walked, Jacob Jablonski singled and Will Huber was hit by a pitch. Andrew Leggo then walked, with the bases loaded to score Duncan for the Red Wolves to pull within 4-3. However, A-State wasn’t able to capitalize on a bases loaded situation when Alex Howard struck swinging.

• Arkansas State and SIU were scheduled twice during the 2018 campaign, however one of the matchups were canceled due to inclement weather. On March 13, the most recent meeting, the Red Wolves defeated SIU 9-8 in the 11th inning on a Drew Tipton walkoff homerun.
• Nate Alberius turned in her fourth straight quality start of the year with another solid outing on the mound. The junior tossed 6.2 innings and had six strikeouts and four walks, while scattering three unearned runs on four hits. He gave up anunearned run in the first inning, but settled down and retired 11 batters in a row between the third and seventh innings.

• A-State trails the all-time series with Southern Illinois by a count of 26-49. The Red Wolves and Salukis met for the first time in 1948 with AState winning the first two games by scores of 3-2 and 8-6. Arkansas State won the first game in 1949by a score of 14-2 in Jonesboro before SIU got on the board with a 6-3 win in Carbondale later in the year.
• The two teams played every season from 1948 to 1957 with SIU leading the series by a count of 13-6, including a sweep of four games in the 1953 campaign. However, the Salukis dominated the series when it resumed in 1963 to the tune of a24-2 mark through 1978 with the two teams playing most years during that time frame. A-State won the first game in 19631-0 and won again in 1966 5-0, but Southern Illinois won 16 straight after that.

• The series picked up again in 1988 with A-State splitting four games with SIU. The teams played 17 games from 1988 through 1996 with the Red Wolves holding a slight 9-8 mark. The series resumed again in 2008 with A-State taking a loss. • Head coach Tommy Raffo took over in 2009 and currently has an 8-3 mark against Southern Illinois in his tenure. Raffolost the first meeting 10-3 in Carbondale, but A-State won 14-5 and 5-3 the following year to open up the season. A-Statewon 4-3 in 2011, but the two squads didn’t play again until 2015 when the Red Wolves won 10-8 at SIU. A-State swept the two meetings in 2016, including a 1-0 walk-off win on a wild pitch at Tomlinson Stadium before the two teams split wins in 2017.
• Southern Illinois enters the mid-week match 17-19 overall and 7-1 in the Missouri Valley Confernce after dropping three0straight contest to Illionois State over the weekend. The Suluki’s dropped Friday’s contest 7-4, Saturday’s contest7-6 before dropping the series finale 8-4 in Carbondale, Ill.

Original article source: http://www.astateredwolves.com//ViewArticle.dbml?DB_OEM_ID=7200&ATCLID=211801134 | Article may or may not reflect the views of KLEK 102.5 FM or The Voice of Arkansas Minority Advocacy Council