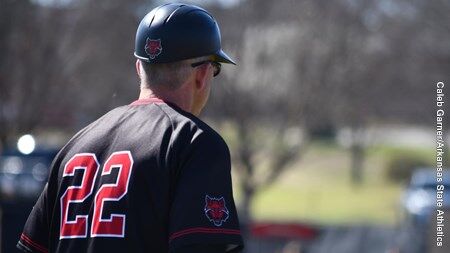 “We are very excited to announce our signees for the 2023 recruiting class,” Raffo said. “Drew LaBounty did a great job of following through by evaluating future needs and identifying talent in the early signing period. This group of student-athletes brings a presence on the mound along with a special left-handed-hitting infielder. This a great beginning to our incoming class next year.”

JACKSON DOWNING – RIGHT-HANDED PITCHER – KANSAS CITY, MO. (LIBERTY NORTH HS)
Jackson Downing is one of the top right-handed pitchers in the state of Missouri, hailing from the Kansas City area and Liberty North High School. The 6-1 righty helped lead the Eagles to a 6A state title this past spring. Boasting a three-pitch mix, Perfect Game ranks him as the seventh-best righty in Missouri and one of the top 500 high school prospects nationally. Downing is also a two-time Perfect Game Preseason All-American Central Region Honorable Mention selection and plays club baseball in the Kansas City Royals Scout Team program.

LaBOUNTY ON DOWNING: “Jackson, from Liberty North High School in Kansas City, Missouri, is a right-handed pitcher that has the ability to play a big role for us as a freshman. He has good feel for three pitches and competes in the zone. Jackson has the makings to be a starter in the Sun Belt for years to come.”

AIDAN HOUSEWORTH – INFIELDER – ST. LOUIS, MO. (CHAMINADE HS)
Aidan Houseworth is a power-hitting middle infielder from St. Louis who has started at shortstop for four seasons. As a sophomore, he was named First Team Metro Catholic Conference and owned an OPS of .950 or better as a sophomore and junior. Perfect Game has ranked Houseworth inside the top 500 nationally. He plays club baseball for St. Louis Gamers Baseball, coached by former A-State standout hurler Matt Whiteside, and led his summer squad with 64 hits last season.

LaBOUNTY ON HOUSEWORTH: “Aidan is a left-handed-hitting middle infielder from St. Louis, Missouri, and Chaminade High school. He has the ability to be an impact player in the middle of the infield for us as soon as he steps on campus. Aidan has elite bat-to-ball skills and projects as a middle-of-the-order-type player.”

COLLIN MALONEY – RIGHT-HANDED PITCHER – ST. LOUIS, MO. (MEHLVILLE HS)
Collin Maloney also boasts a three-pitch mix and is one of the state of Missouri’s top hurlers. He is a two-time all-conference selection, being named his conference’s Pitcher of the Year last season as a junior. He went 6-3 and struck out 82 batters to just 15 walks in 55 innings last season.

LaBOUNTY ON MALONEY: “Collin is a 6-3 right-handed pitcher from St. Louis, Missouri, and is a product of Mehlville High School. He has the potential to come in and be a starter for us early in his career with his ability to go late in games. He has a workhorse mentality and loves to compete. We are excited for him to be a part of the program next fall.”

DEUCE MUSIAL II – RIGHT-HANDED PITCHER – DE PERE, WIS. (NOTRE DAME DE LA BAIE ACADEMY)
Deuce Musial is a tall righty from Wisconsin with a solid fastball who preps at Notre Dame Academy in Green Bay. He boasts a quick delivery with a lot of upside, owning a four-pitch repertoire. Musial helped the Tritons finish in the WIAA Division I sectional final last season and looks to take on the role of NDA’s ace as a senior.

LaBOUNTY ON MUSIAL: “Deuce, from De Pere, Wisconsin, and Notre Dame De La Baie Academy, is a 6-5 right-handed pitcher with a ton of potential. We project Deuce to be a starter for the Red Wolves throughout his career. Deuce has a really good fastball that we believe will be highly effective in this league.”

Read more:
A-State Baseball Signs Four in Fall Signing Period. Article may or may not reflect the views of KLEK 102.5 FM or The Voice of Arkansas Minority Advocacy Council