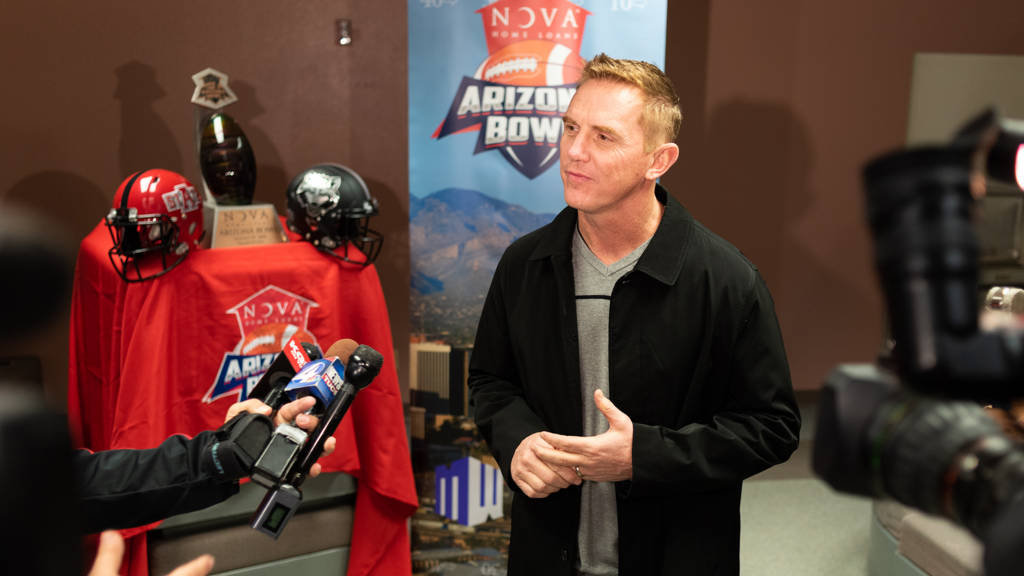 TUCSON , Ariz. (12/26/18) – The Arkansas State football team arrived in Tucson, Ariz., yesterday evening to an enthusiastic welcome from the Arizona Bowl and continued its on-field prep Wednesday for its eighth consecutive bowl game set for Saturday at 12:15 p.m. (CT).

The Arizona Bowl literally rolled out the red carpet for the Red Wolves, who were greeted by a mariachi band playing Christmas music and a crowd of fans, bowl officials and media outlets as they exited the plane.

“Most of our guys have never been beyond Texas, much less coming (to Arizona) and being able to see the mountains and this climate. I’ve been around (bowl games) before, so I was really excited to watch how our guys responded and have looked like kids on Christmas, which is what you would expect.”

A-State checked into its team hotel, the Westin La Paloma, after arrival and had a meeting with bowl officials to become more familiar with the plans for their stay in Tucson. The team then spent a couple of hours at Dave and Busters, enjoying food and fun with their teammates and coaches.

A-State was back on the field Wednesday morning at Salpointe Catholic High School for their first practice in Tucson. The Red Wolves will hold an additional practice at the site on Thursday and a Friday walk-through at Arizona Stadium, where A-State will face Nevada for the sixth time in school history.

The Red Wolves completed the regular season with an 8-4 record and as the Sun Belt Conference’s West Division co-champions. A-State’s eight victories are its third highest regular-season total ever as an FBS member and ties its fourth most in the history of the program.

“Obviously, we wanted to play in the conference championship, but I’m grateful to be in the bowl game,” said A-State wide receiver and Sun Belt Conference Newcomer of the Year Kirk Merritt. “We just want to finish the season off strong by winning this last game for the seniors.”

Arkansas State had another team function planned for Wednesday night at Top Golf and has multiple activities planned for Thursday. Several players are scheduled to visit UMC-Diamond Children’s Center at 9 a.m. for a community service project and that will precede A-State’s 11:30 a.m. practice. The Red Wolves will then attend a players’ event and dinner that night for both teams at Old Tucson.

Original article source: http://www.astateredwolves.com//ViewArticle.dbml?DB_OEM_ID=7200&ATCLID=211785080 | Article may or may not reflect the views of KLEK 102.5 FM or The Voice of Arkansas Minority Advocacy Council