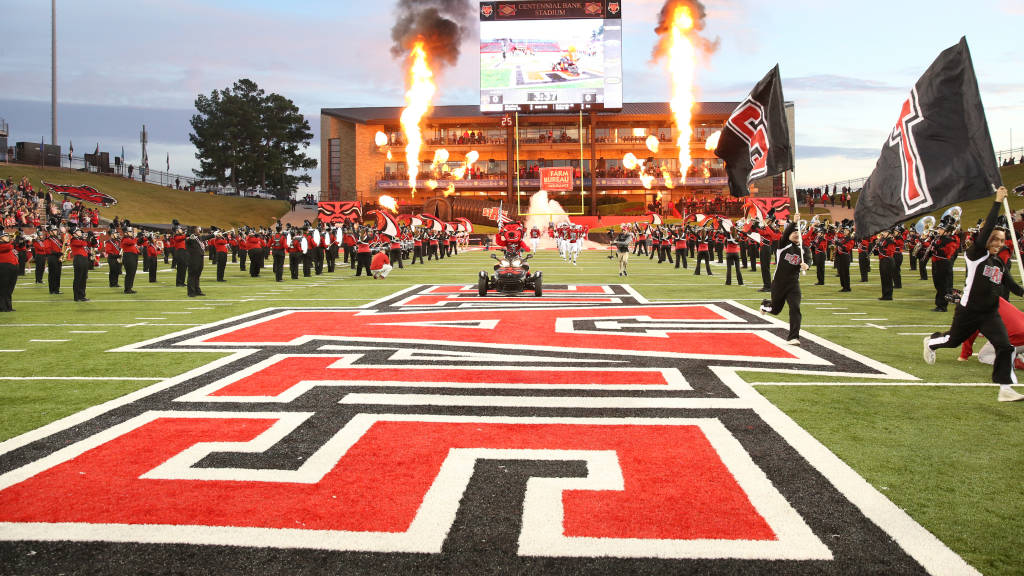 JONESBORO, Ark. (5/30/19) – The Arkansas State Athletics Department announced Thursday the kickoff times, themes and several special events for the Red Wolves’ six home football games, along with television information for two of its first three contests to begin the 2019 season.

Along with their Thursday-night home game against Louisiana that will be broadcast on ESPNU, the Red Wolves’ now have two nationally-televised games announced thus far.  The Red Wolves’ matchup against the Ragin’ Cajuns will kickoff at 6:30 p.m.

A-State’s home games versus Southern Illinois and Texas State on Sept. 21 and Oct. 26, respectively, will begin at 6:00 p.m.  Also being played at Centennial Bank Stadium, its games against Coastal Carolina on Nov. 16 and Georgia Southern on Nov. 23 will kickoff at 2:00 p.m.  A-State’s game times are still subject to change.

The Sun Belt Conference also announced today that its championship game on Dec. 7 will kick at 11:00 a.m. CT and air on either ESPN or ESPN2 as determined at a later date.

Additional details will be announced in the future regarding game themes, special events and promotions surrounding the Red Wolves’ six home games, which include the “Paint the Town Red” tradition for their home opener when fans are encouraged to wear red to the game.

A-State’s contest against Southern Illinois will feature a “Stripe the Stadium” theme, where fans will be encouraged to wear different colors based on what section of the stadium their seats are located.  A map of the sections and colors, along with more information, will be announced soon.  The game has also been tabbed as Family Weekend and Band Day to go along with the Extra Yard for Teachers promotion.

The Red Wolves’ contest against Louisiana will have a “Throwback Thursday” theme where fans are encouraged to wear their ‘old school’ A-State gear.  Their Homecoming game will be played against Texas State on Oct. 26, which will also be Spirit Day and Ag Day.

A “Heroes Appreciation” theme is set for the game against Coastal Carolina, while A-State’s home finale against Georgia Southern will be its annual “Senior Day.”

Season tickets for A-State’s 2019 campaign are currently on sale through the A-State Ticket Office, located at First National Bank Arena’s lower red entrance.  They are available by calling 870-972-2781, by visiting the ticket office in person or going online to AStateRedWolves.com.

Original article source: http://www.astateredwolves.com//ViewArticle.dbml?DB_OEM_ID=7200&ATCLID=211804579 | Article may or may not reflect the views of KLEK 102.5 FM or The Voice of Arkansas Minority Advocacy Council