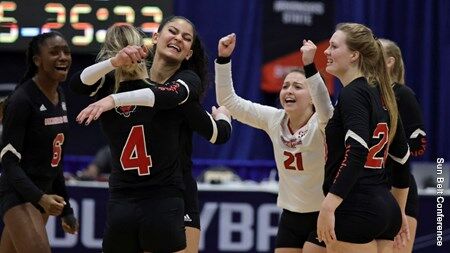 FOLEY, Ala. (11/17/22) – A historic performance by Arkansas State volleyball senior Macey Putt fittingly saw her behind the service line with the match, and season, on the line.

Putt, who eclipsed the 1,000 career digs mark and became just the sixth player in program history with 1,000 kills and 1,000 digs in a career, served her second of two aces to give her team match point up 17-16 in the fifth set. Freshman Bailey Helzer then powered a kill off the block and propelled the Red Wolves (9-21) into the Sun Belt Conference Quarterfinals with a 3-2 second-round win over East No. 3 seed Old Dominion Thursday afternoon.

A-State’s win marks its first trip to the conference tournament quarterfinals since 2019, and the first time with two victories in the event since 2018.

Sarah Martinez corralled 16 digs and helped orchestrate the Red Wolves’ offense with eight assists. She also served one of A-State’s four aces, with Putt serving a pair and Abby Harris accounting for one.

Both teams combined for 22 blocks on the day, with ODU accounting for 14 total behind seven from Hailey Duncan and six from Bailey Burgess. Both also registered double-digit kills, but Myah Conway led all players with 23 on 63 swings.

The first set established a back-and-forth theme for the match, with eight ties and six lead changes. Neither team led by more than two for much of the frame until a kill by Kyla Wiersema capped a 4-0 run that gave A-State a 22-17 lead. ODU rallied with three straight to pull within two, but the Red Wolves clinched the opener with three of the final four points after a timeout to take the set 25-21 and lead 1-0 in the match.

Old Dominion took momentum early in the second set to lead 13-7, but A-State later clawed back to tie it at 23-all on a block by Wiersema and Wilcox. The teams traded leads, with a Helzer kill tying it at 24 and forcing extra points. Back-to-back kills by Putt then handed set point to the Red Wolves at 26-25, but ODU claimed the next three points to even the match at a set apiece with the 28-26 decision in set two.

Arkansas State moved out to a 16-11 lead in the third set with an 8-1 run before the Monarchs pulled within one on an ace by Burgess that made it 21-20. The Red Wolves did not break, taking a 2-1 lead in the match with four of the next five points to win the set 25-21.

Momentum once again swung in A-State’s direction early in the fourth, but ODU kept it close until it led by three on a kill by Conway to force a timeout. The Red Wolves battled back to within one on a kill by Reeves, but Conway clinched the stanza for the Monarchs to send the match to a win-or-go-home fifth set.

Old Dominion surged out to an early 5-1 lead in the fifth before A-State caught fire offensively to lead 8-7. One of Ilayda Dincer’s nine kills gave her team the 10-8 lead, later followed by a Putt kill to give the Scarlet and Black match point with a 14-11 lead.

ODU called a timeout, then took four straight to hold match point up 15-14, but Putt and Billings denied Conway at the net to tie it at 15. A net violation then gave the Monarchs another match-point opportunity up 16-15, but a service error tied it at 16, then Putt delivered an ace to push it back to a 17-16 Red Wolves lead. The rookie Helzer sealed the match in rousing fashion with her 15th kill to continue her outstanding tournament and move Arkansas State to the quarterfinals for the first time since 2019.

The Red Wolves have now claimed a pair of matches at the #SunBeltVB Championship and are headed to the quarterfinals. ?? ?? pic.twitter.com/R1yqzYEib7

A-State’s season continues Friday with a rematch against the West No. 2 seed Troy. First serve against the Trojans inside the Foley Events Center is slated for Noon on ESPN+.

Tickets may be purchased online through the Foley Sports Tourism Box Office. Tickets are sold on a daily basis and are $10 per day for adults and $5 per day for children ages 12 and under. Students of Sun Belt Conference institutions are admitted free with a valid student ID.

Read the original here:
A-State Advances to SBC Quarterfinals with Marathon Five-Set Win. Article may or may not reflect the views of KLEK 102.5 FM or The Voice of Arkansas Minority Advocacy Council