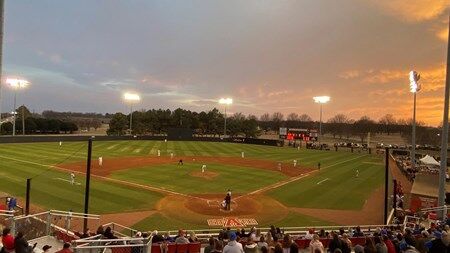 JONESBORO, Ark. (1/18/23) – With just under a month remaining until the Arkansas State baseball team begins the 2023 campaign, the deadline for season ticket renewals is set for Feb. 1.

The 35 home contests at Tomlinson Stadium-Kell Field is a program record, with 15 of the first 16 games of the season played in Jonesboro. Opening Day of the 31st season at “The Tom” is slated for Feb. 17 with the first game of a three-game series versus Arkansas-Pine Bluff.

A-State returns 13 players who saw action in 2022, including a pair of players who hit 10 homers apiece in Brandon Hager and Jared Toler as well as ERA leader Tyler Jeans. Twenty-two newcomers also dot the team’s roster.

The program’s annual Grand Slam Banquet is set for Monday, Feb. 13, inside First National Bank Arena and features actor Patrick Renna, who starred as “Hamilton ‘Ham’ Porter” in The Sandlot. For more information, please contact Tommy Raffo at (870) 273-3279 or by email at [email protected], or Brandon Cunningham at (870) 972-3005 or [email protected] to reserve your table today.

Read more from the original source:
2023 Baseball Season Ticket Renewal Deadline Set for Feb. 1; Single-Game Tickets On Sale Feb. 3. Article may or may not reflect the views of KLEK 102.5 FM or The Voice of Arkansas Minority Advocacy Council