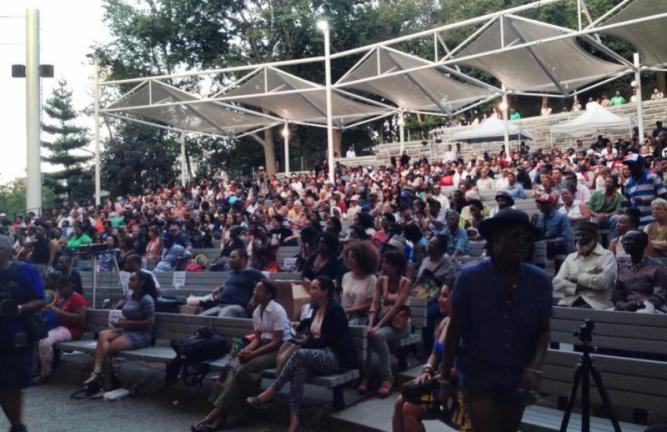 The 17thAnnual ImageNation Outdoors Festival: Soul Cinema and Music Under the Stars kicks off this year on August 8th with an outdoor screening of BOSS: The Black Experience in Business.

Held in partnership with the Historic Harlem Parks and the New York City Department of Parks and Recreation, ImageNation Outdoors, is New York City’s only free summer-long outdoor film and music festival dedicated to Black cinema, will continue with a dynamic slate of free entertainment.

On August 22nd, ImageNation Outdoors will present a special screening of Amazing Grace, the acclaimed documentary of Aretha Franklin recording her gospel album live at the New Temple Missionary Baptist Church in Los Angeles in 1972.  The screening will follow a live musical tribute, and Harlem will attempt to make the Guinness Book of Records by forming the world’s longest Soul Train line.

On August 30th and September 6th, join ImageNation will be screening When They See Us. The critically acclaimed docu-series that tells the untold story of the Exonerated Five. Korey Wise and Kevin Richardson of The Exonerated Five will be in attendance.

Come to slay with a screening of an intimate documentary as stylish and unconventional as its subject, Grace Jones: Bloodlight and Bami on September 20th.  The documentary depicts Jones in her Jamaican hometown, follows her into the studio with longtime collaborators Sly & Robbie, and at cutting-edge live shows—featuring performances of “Slave to the Rhythm,” and “Pull Up to the Bumper”.

The screening will follow live tribute performances and a fashion show of OKETSA by Thulare Monareng and designs by Sheila Prevost.

Festival dates are August 8th and continue through September 20th.   All programs are free and open to the public. Music and activities begin at 6:00PM; and, films begin at sundown.

Kids’ Night Out is curated by eight year-old Harlemite Kgari Kgama-Gates who shared, “I chose the film Spider-Man: Into the Spider-Verse because it really inspired me to have a young superhero who looks like me. Plus, the music is awesome!”

Children as well as adults are bound to have a great time as the screening celebrates Harlem Week as well.  The program will also offer STEM games, face painting, and a back to school backpack giveaway by the Harlem-based Xi Phi Chapter of Omega Psi Phi Fraternity, Inc.

Full descriptions of the festival programs are enclosed below. All programs are free and open to the public. Music/activities begin at 6:00PM; and, films begin at sundown:

BOSS: The Black Experience in Business

Tracing more than 150 years of African American men and women, from those bound by bondage to moguls at the top of multibillion-dollar empires, Boss: The Black Experience in Business, seeks to claim their place in the story of American entrepreneurship.

Still grieving after the murder of her boyfriend, hairdresser Justice (Janet Jackson) writes poetry to deal with the pain of her loss. Unable to get to Oakland to attend a convention because of her broken-down car, Justice gets a lift with her friend, Iesha (Academy Award-winner, Regina King) and Iesha’s postal worker boyfriend, Chicago (Joe Torry). Along for the ride is Chicago’s co-worker, Lucky (Tupac Shakur), to whom Justice grows close after some initial problems. But is she ready to open her heart again?

If Beale Street Could Talk

This adaptation of the James Baldwin Novel, stars Academy Award winner Regina King, Coleman Domingo, Michael Beach, Teyonah Parris, Aunjanue Ellis and newcomer Kiki Layne. The film follows a pregnant woman in who Harlem desperately scrambles to prove her fiancé innocent of a crime he did not commit.

In the 1970s, the Bronx was on fire. Left unprotected by the city government, nearly a half-million people were displaced as their close-knit, multiethnic neighborhood burned, reducing the community to rubble. While insidious government policies caused the devastation, Black and Latino residents bore the blame. In this story of hope and resistance, Bronx native Vivian Vazquez exposes the truth about the borough’s sordid history and reveals how her embattled and maligned community chose to resist, remain and rebuild.

Spiderman: Into the Spiderverse

In this 2019 academy Award winner, Teen Miles Morales becomes Spider-Man of his reality, crossing his path with five counterparts from another dimensions to stop a threat for all realities. Proceeded by a back to school backpack giveaway, STEM games and more!

When They See Us

​Five teens from Harlem become trapped in a nightmare when they’re falsely accused of a brutal attack in Central Park. Based on the true story.

When They See Us

​Five teens from Harlem become trapped in a nightmare when they’re falsely accused of a brutal attack in Central Park. Based on the true story

Larger than life, wild, scary and androgynous – Grace Jones plays all these parts. The stage is where her most extreme embodiments are realized. The film includes performances of iconic hits such as Slave To The Rhythm, Pull Up to the Bumper and more.  Film is preceded by live tribute performances and a fashion show featuring OKETSA by Thulare Monareng.

Original article source: https://goodblacknews.org/2019/08/02/17th-annual-imagenation-outdoors-festival-of-soul-cinema-music-kicks-off-aug-8-in-ny/ | Article may or may not reflect the views of KLEK 102.5 FM or The Voice of Arkansas Minority Advocacy Council